You are here: Home › Tutor Perini – Cash flow miracle, or not?
By CARRD on November 2, 2016 in Statewide, Uncategorized
Tweet

Tutor Perini is a large construction firm that is building many of the nation’s large transit infrastructure projects, including California High Speed Rail and the San Francisco Central Subway project.

We have expressed concern about a disconnect between accounting profits and cash losses – a pattern that has continued since we highlighted it during the high speed rail procurement process.  Last month, a very well-known short selling firm called Muddy Waters focused on the same accounting issues.

Tutor’s bankers have also had a laser focus on the lack of cash earnings. Credit lines have been ratcheted down with a tighter and tighter leash on spending, giving Tutor a big incentive to find other sources of capital to finance its cash losses.

In order to get other people to lend you money, you do have to convince them that you will eventually have the money to pay them back. This year, the company has been on a mission to collect money from “deadbeat clients”. The first six months of the year showed little result from this campaign – the missing cash grew by almost $50 million.

This quarter – coincident with an effort to sell $500 million of bonds – it looks like there has been a giant turnaround.  There is positive cashflow!

There are several tried and true ways to bump up cashflow, and it looks like Tutor Perini is using all of them. The problem is that these are short term and can be very costly in the long run.

Don’t pay your vendors. Tutor Perini’s corporate unpaid bills have jumped suddenly – higher than ever before. Even though business is not up, there are $38 million more of unpaid bills in the last quarter. 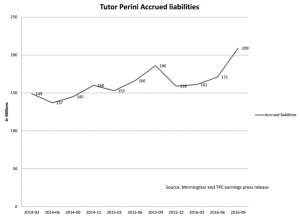 Stop reinvesting in capital equipment, or find some way to buy it that doesn’t show up on your balance sheet.

Tutor is in the heavy construction industry. Trucks, forklifts, cranes, you name it. According to Tutor’s financial statements, they have stopped buying equipment or even leasing it. Over the last two years, equipment purchases have fallen off a cliff. This last quarter, they only reported $1.6 million of capital equipment spending. How do you support over a $1 billion of revenue on that little investment? 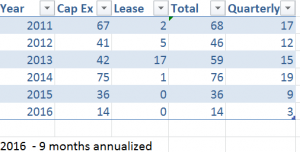 You are either spending money but finding a way not to put it on your balance sheet OR you are not spending it. Last month, a Tutor Perini employee working on the Central Subway project in San Francisco needed 60 stitches in his leg after trying to cut a plastic pipe with a box cutter. If the reduction in equipment spending is real, there will almost certainly be an impact on Tutor’s ability to work on projects.