UPRR owns significant portions of the corridor that the California High Speed Rail program has planned to use or locate near. UPRR has repeatedly stated its opposition to allowing high speed trains on or near its property. This is an issue for many segments of the route, including all those going through the Central Valley.

The primary focus of this letter is the corridor from San Jose to Gilroy. The California High Speed Rail Authority’s failure to respond to a previous UPRR letter about this corridor led to successful environmental ligitation regarding the selection of the Pacheco Pass route over the Altamont Pass route. This litigation is the reason why the HSRA had to issue a revised Program Level EIR, slightly altering the plans and discussing a higher level of impacts, including the loss of traffic lanes on the Monterey Highway and property takings.

The basic plan remained the same. The high speed rail tracks would generally be adjacent to the UPRR property and go through Morgan Hill and Gilroy.

In the meantime, detailed project level work continued and it has become very clear that a more likely route is one that takes a very different path, through farmland to the east of Highway 101 that is currently off-limits to development.

The residents and many environmentalists are up in arms over the Program level EIR which pretended as if the more suburban corridor was the only alternative. They feel that the big decision of which route to take through the Diablo Mountains fails to take into account the environmental consequences of a route through the environmentally sensitive lands.  For instance,  the Program Level EIR only discusses a downtown station while a recent CHSRA presentation showed the above illustration of a potential Gilroy station.

These are both of the Montery Highway alignment (the Program EIR route) and the 101 route. 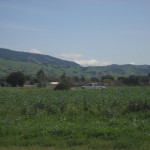 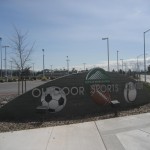 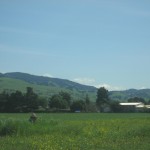 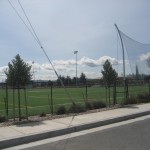 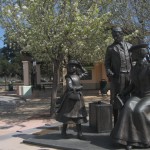 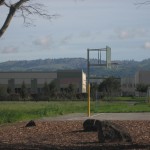 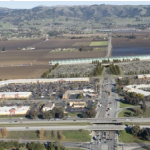 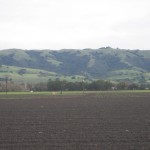 Proposed East Gilroy Station area (yes, it is a floodplain)

2 minute audio clip from CHSRA Operations Meeting May 2010 discussing the UPRR letter (Main speaker is Tony Daniels, the Parsons Brinkerhoff program manager, and the other speaker is Board Member Richard Katz)